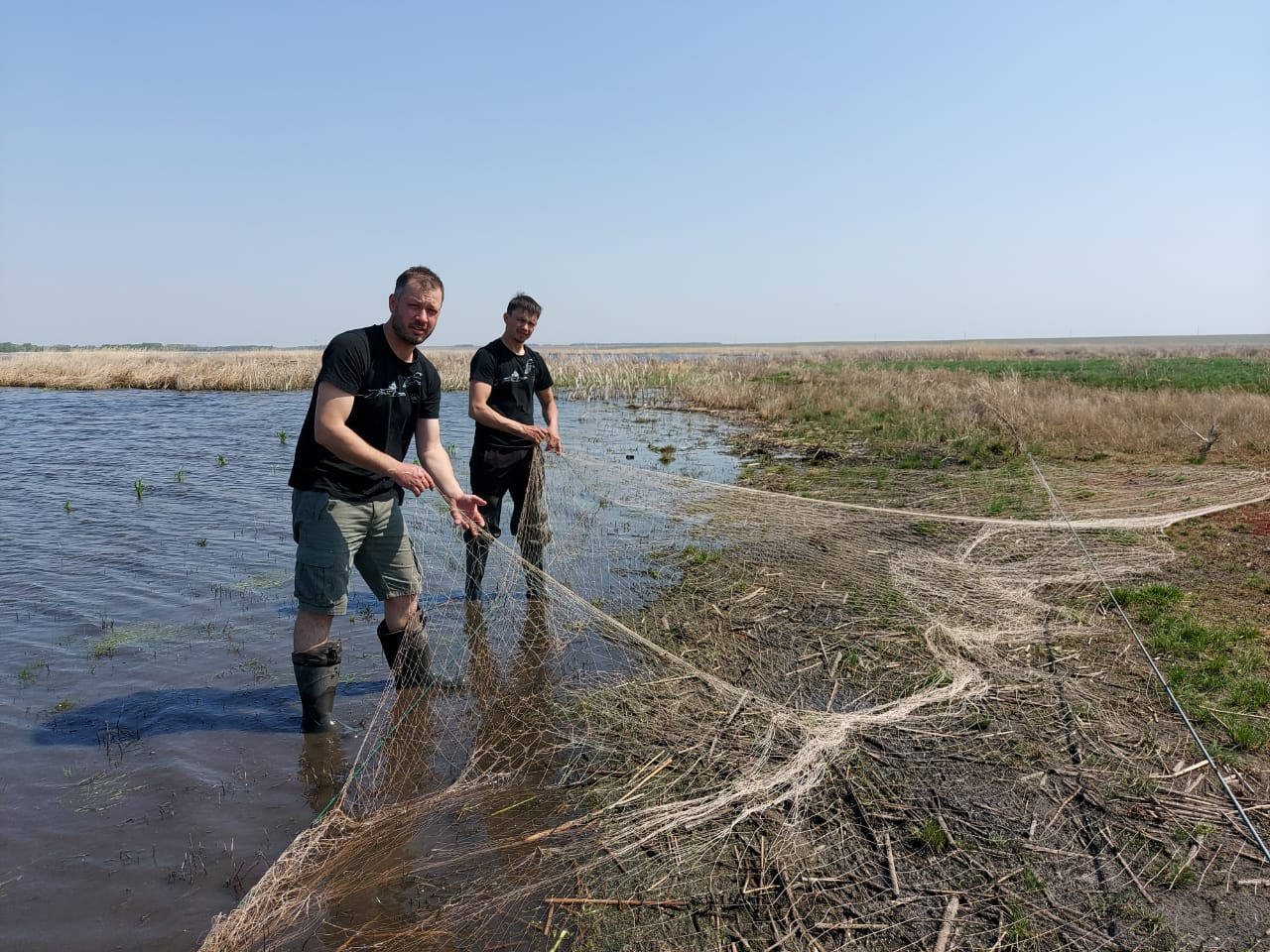 In early May this year, an expedition was organized in Northern Kazakhstan, one of the key spring migration areas of the globally threatened Red-breasted Goose. The goal was to capture new birds and tag them with GPS-GSM transmitters to track their movements during migration and wintering. The tagged birds play a vital role in the monitoring efforts of the project partners in the respective range countries, but also indicate poaching and threats issues. Within the framework of the project, four local experts from ACBK/BirdLife in Kazakhstan and North Kazakhstan State University took part in the fieldwork. 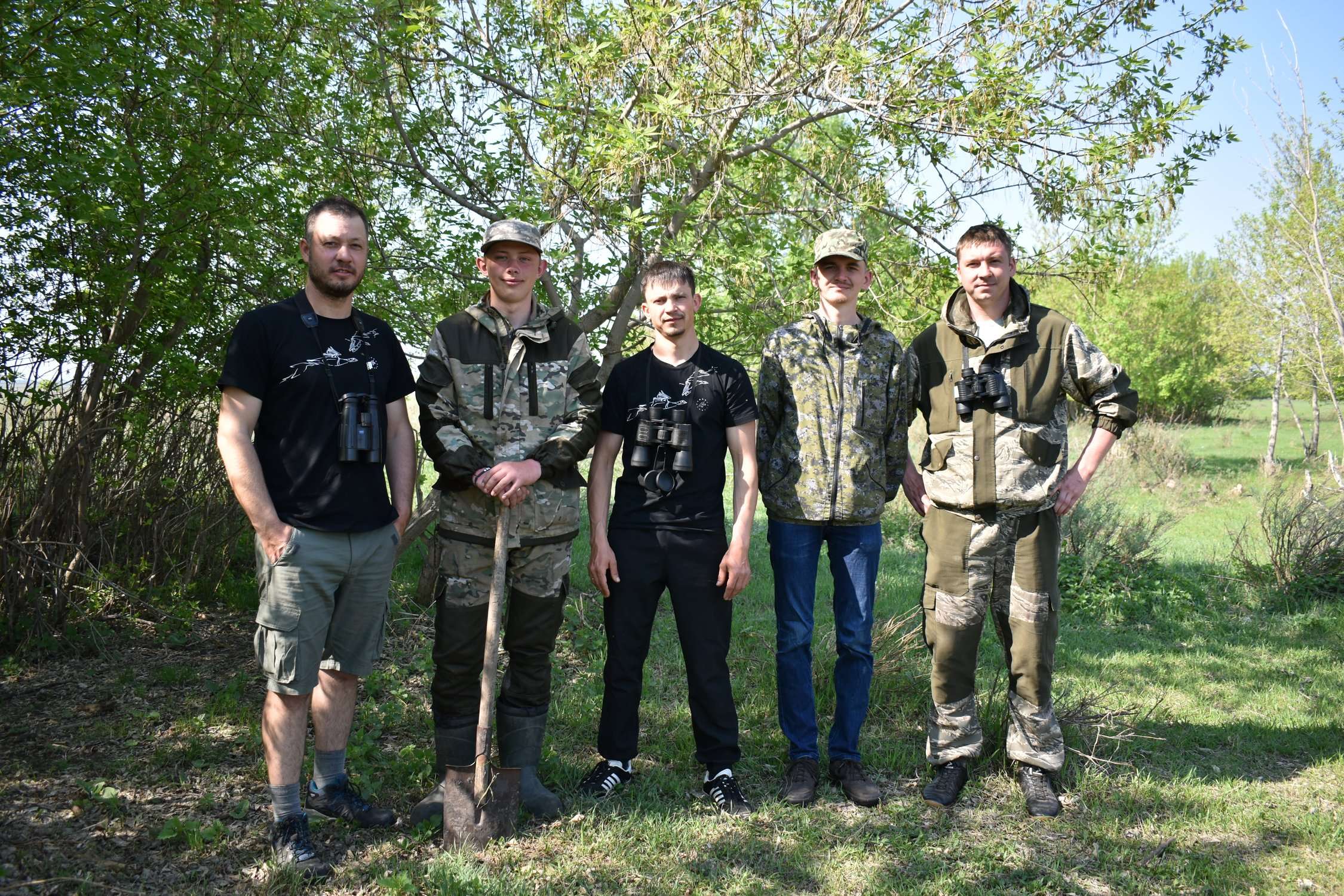 During the expedition, 14 red-breasted geese were caught in the area of ​​the village of Chirikovka, and transmitters were fitted to 10 of them (6 males and 4 females). All captured birds were also marked with colour rings. In the last few years, the catching methods used in Kazakhstan, using a well-chosen place and time period, have proved extremely successful in telemetry surveys of the Red-breasted Goose with dozens of individuals captured and tagged within 4 successful expeditions. The continued satellite tracking of birds has been identified and adopted as a key priority by the AEWA Red-breasted Goose International Working Group at its second in-person meeting in Bucharest in 2019. 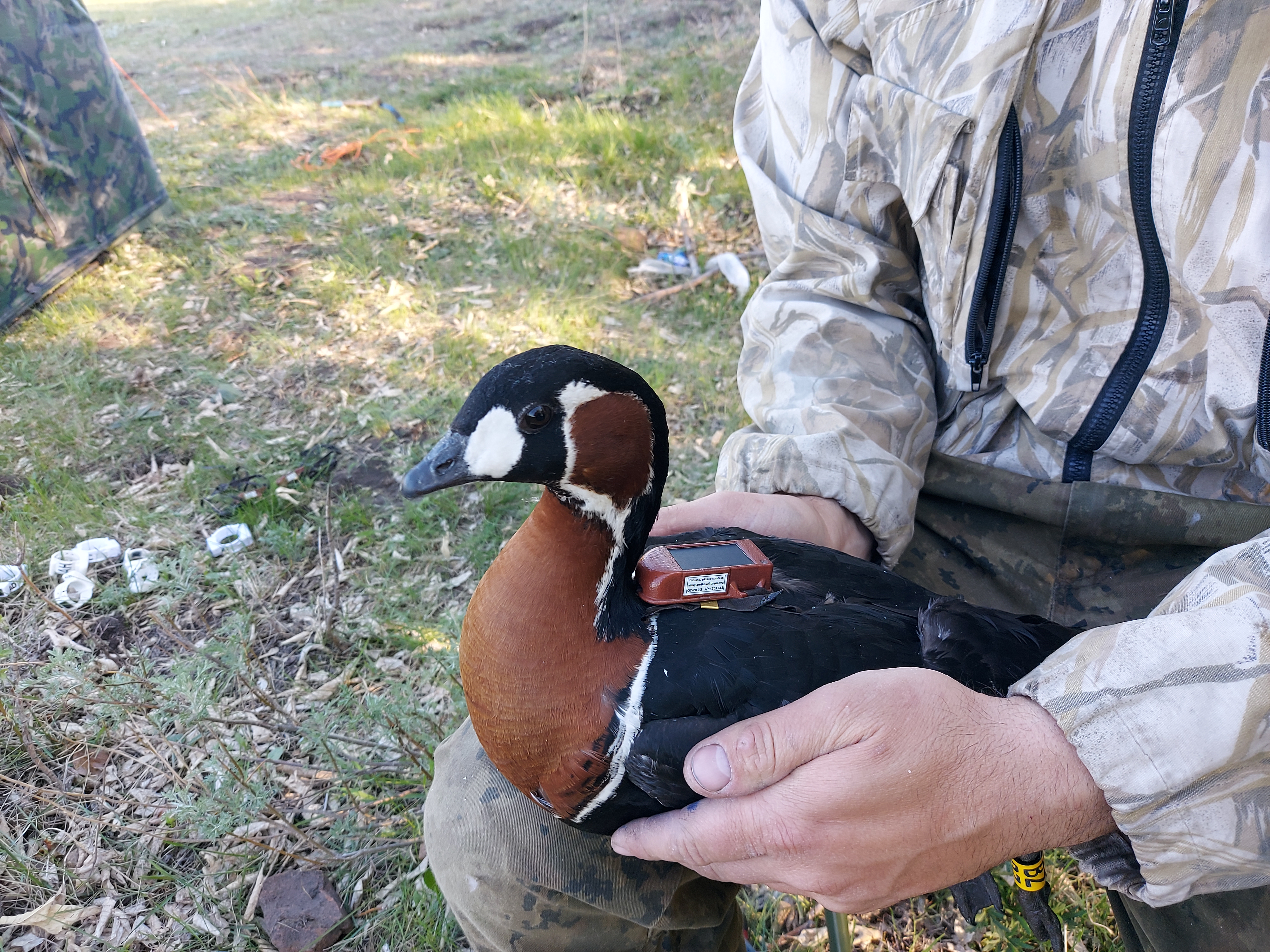 A few days after being tagged, the red-breasted geese headed north and in late May – early June reached the periphery of the nesting range in the Russian tundra. At the moment we have no information about their movements in the nesting territories, due to the lack of mobile network connection in these remote and uninhabited areas. We hope that at the beginning of September when the migration to the south begins, we will again receive a signal from the birds and track together their movements to the wintering grounds on the Balkan Peninsula. 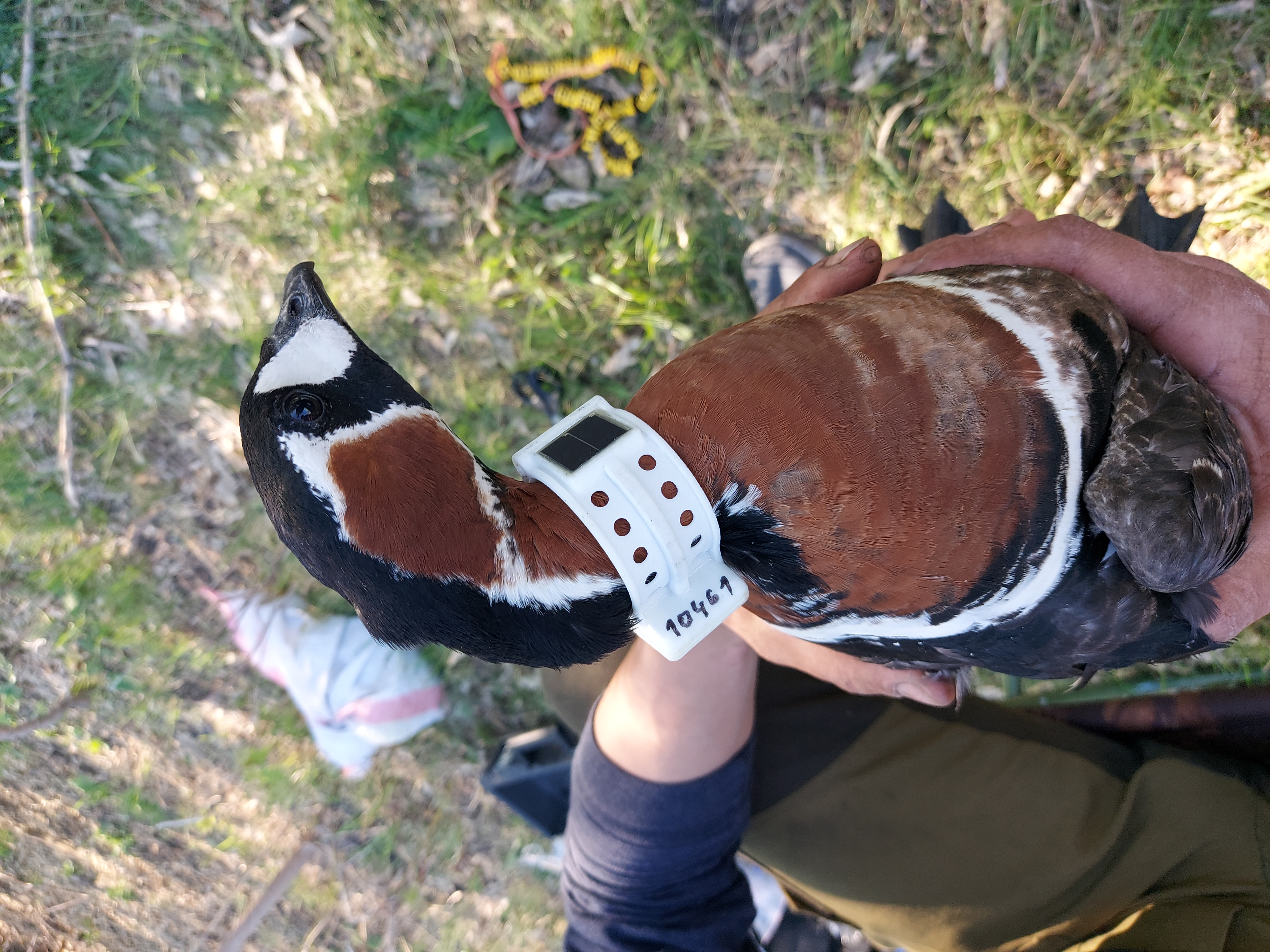 From this year the GPS-collar tags we use have new two-letter coding to be recognizable in the field and also we have started using new colour rings – yellow with black two-letter code. 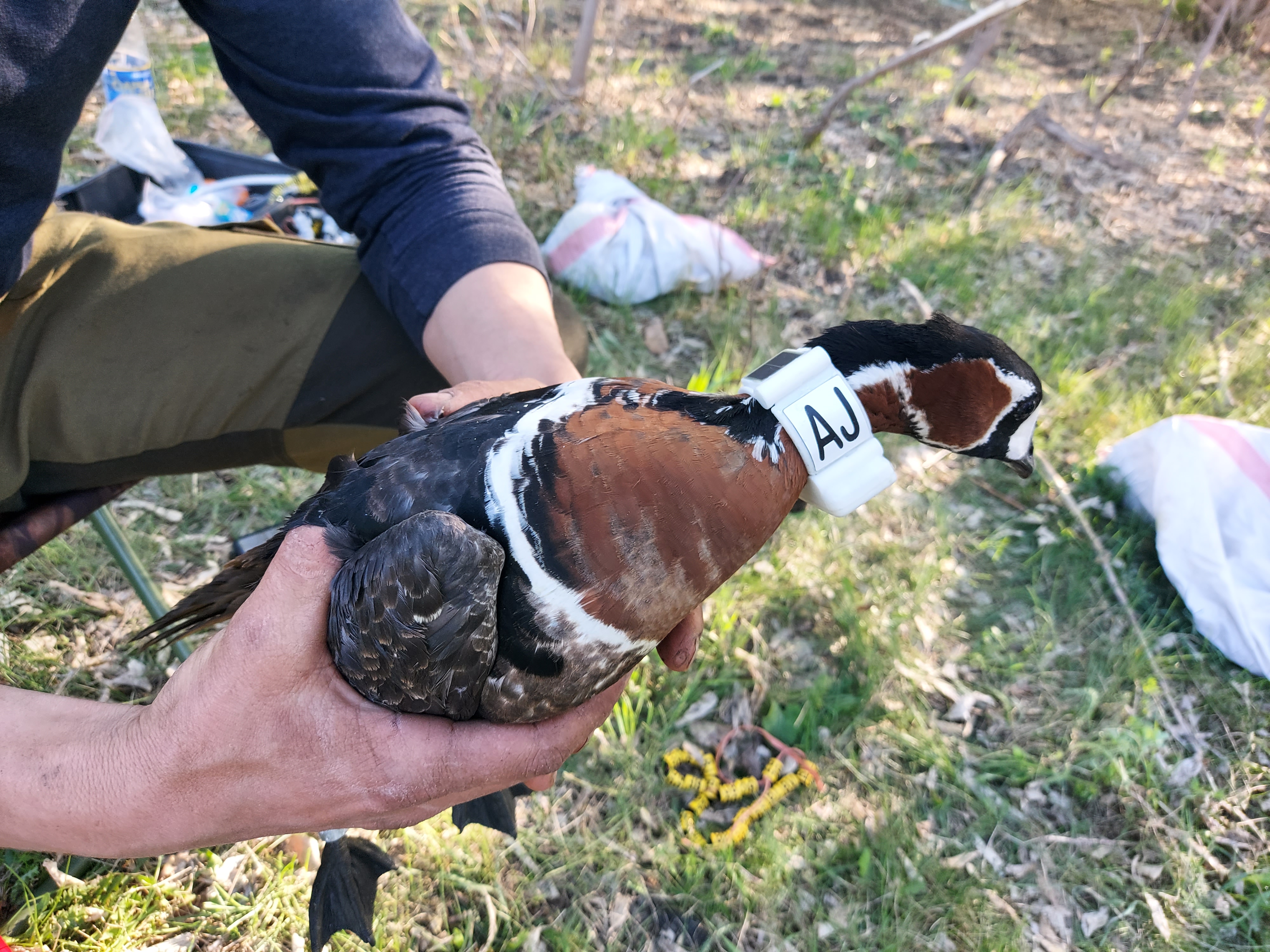