Tanyu is one of the Red-breasted Geese that we tagged with a satellite transmitter in May 2019 in Kazakhstan. That allowed us to follow its migration and learn more about the nesting sites. During the breeding period the bird stayed in the Rostov region in Russia till the beginning of January and then reached the Crimea region in Ukraine. The local partners on the project form Tuzly Lagoons National Nature Park have taken a trip to research the location of the bird and collect some data on the threats, Red-breasted Geese numbers, and so on. Here’s what our colleague Ivan Roussev said:

“Our expedition is approaching the habitats of this wonderful bird – the Red-breasted Goose. Here we find ourselves in the rapidly disappearing unique steppes and wetlands of Ukraine, in the southeastern part of the Kherson region. In the distance you can see the huge propellers of numerous wind parks, which have radically changed the appearance of the terrain, violated the integrity of wildlife ecosystems and created serious problems for birds, taking away habitat among steppes and shallow wetlands. Traveling to these places when everything is drenched in rain is not easy. 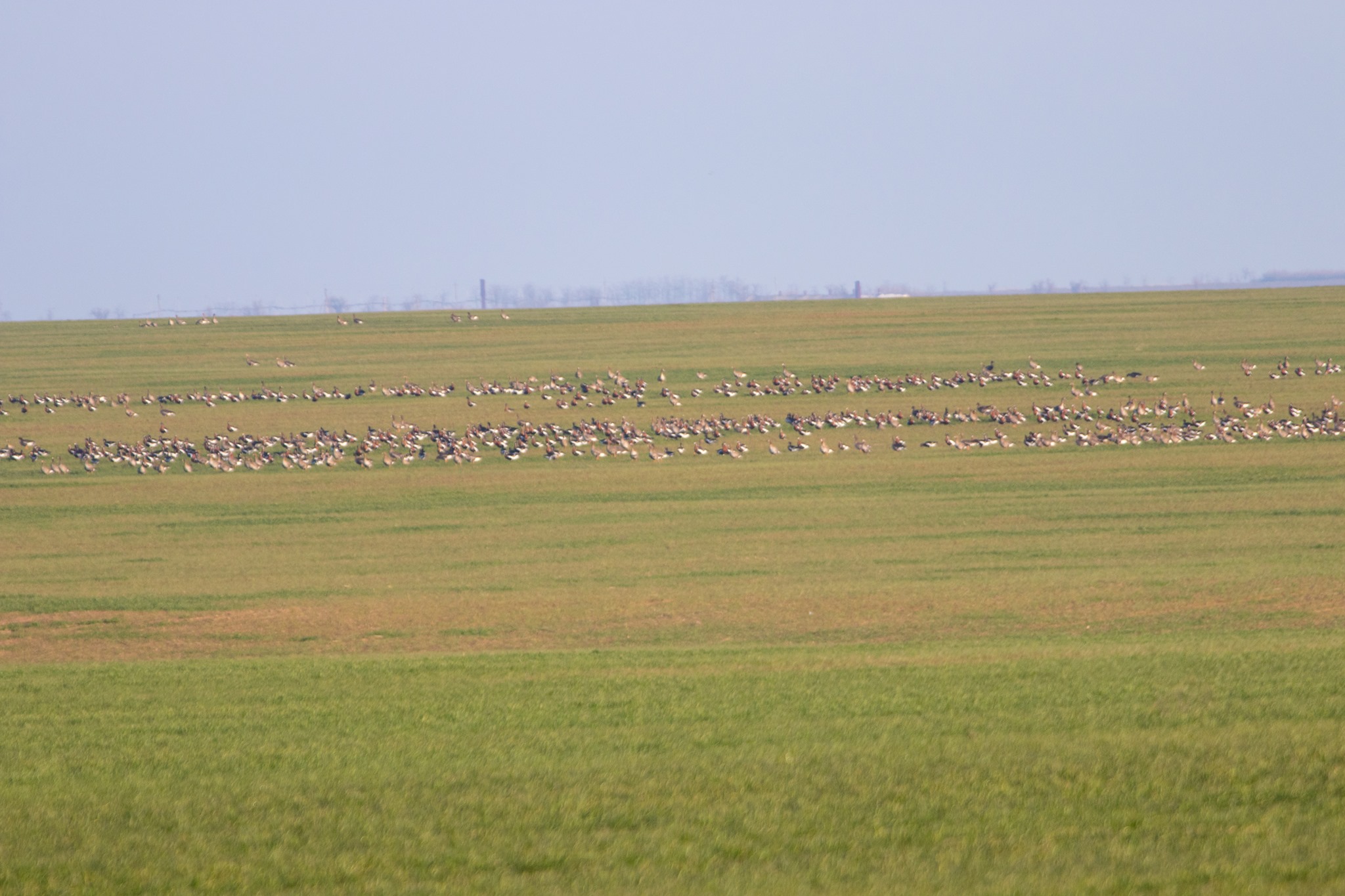 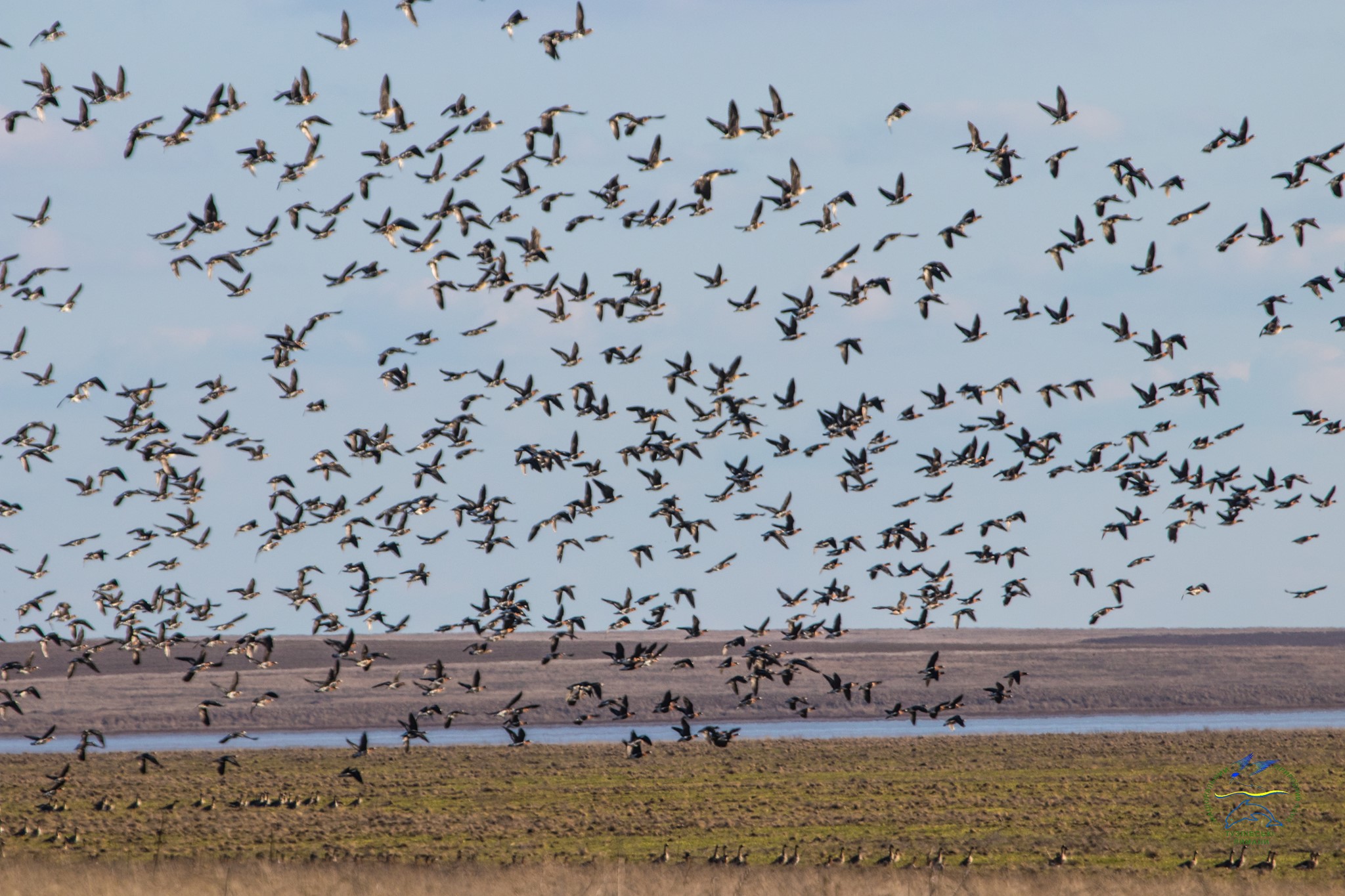 We are approaching the location of the Red-beasted Goose, named Tanyu (after the Bulgarian ornithological scientist Tanyu Michev) tagged with a satellite transmitter. We see White-fronted Geese through the binoculars and optical tubes. They do not allow us to approach them and fly away. So we realize that the birds are constantly disturbed by hunters in these places. However, many Red-breasted Geese have chosen to winter there. Tanyu was among them.

The satellite transmitter shows us the flyway paths and places where the bird stops. We go on and see about 1700 White-fronted Geese flying towards the open water of Sivash. It is a vast system of coastal lagoons in the western part of the Azov Sea. It is impossible to see a goose with a satellite transmitter from such a long distance, even in an optical tube, but we know that Tanyu is there. After a short break, the birds rise above the water and fly in the fields of winter wheat to feed. We can count them again and even make a video. The sun goes down quickly and we have decided to look for a place to stay overnight. Along the way, we see three poachers with guns, wandering around where the Red-breasted Geese feed. We were unable to meet them as they hid and lost track of them. ”

In the area where our colleagues spent the night, they met and interviewed local people and hunters. From them we learned that the hunting pressure in the area is very strong. The place is very important for the Red-breasted Goose. And we make huge efforts to save the species but hunters and poachers kill hundreds of geese, including protected. And this is one of the most negative factors for the species to survive.

We tagged 10 Red-breasted Geese in May 2019 in Kazakhstan but almost all of them stopped signaling: 1- in Russia, 3 – in Kazakhstan, 4 – in Romania. Now only one goose – Tanyu transmits a signal in Ukraine, and in Romania we receive data from Peter.
We sincerely hope that Tanyu will survive in Ukraine. And Peter – he has already left Romania and has taken spring migration flyway – he is already in Rostov Region and will soon fly to Kalmykia.

The expedition was carried out as a part of the international project LIFE for Safe Flight by the ecological organization Revival and also included members of the Ukrainian Society for the Protection of Birds.