One of our satellite tagged Redbreasts – Emilia, died on 01/14/2020 in the region of Victoria village in SE Romania. For the nine months since she was tagged, this goose gave us extremely valuable information – over 7200 GPS locations, most of all other geese. She flew through the toughest places, spent much of the fall in a key habitat for geese in Kazakhstan – Taldykol during active hunting period, prior to this nested in the valeyt of the Pyasina river of Taimyr, spent about 2 months in Romania. However it never reached Bulgaria… 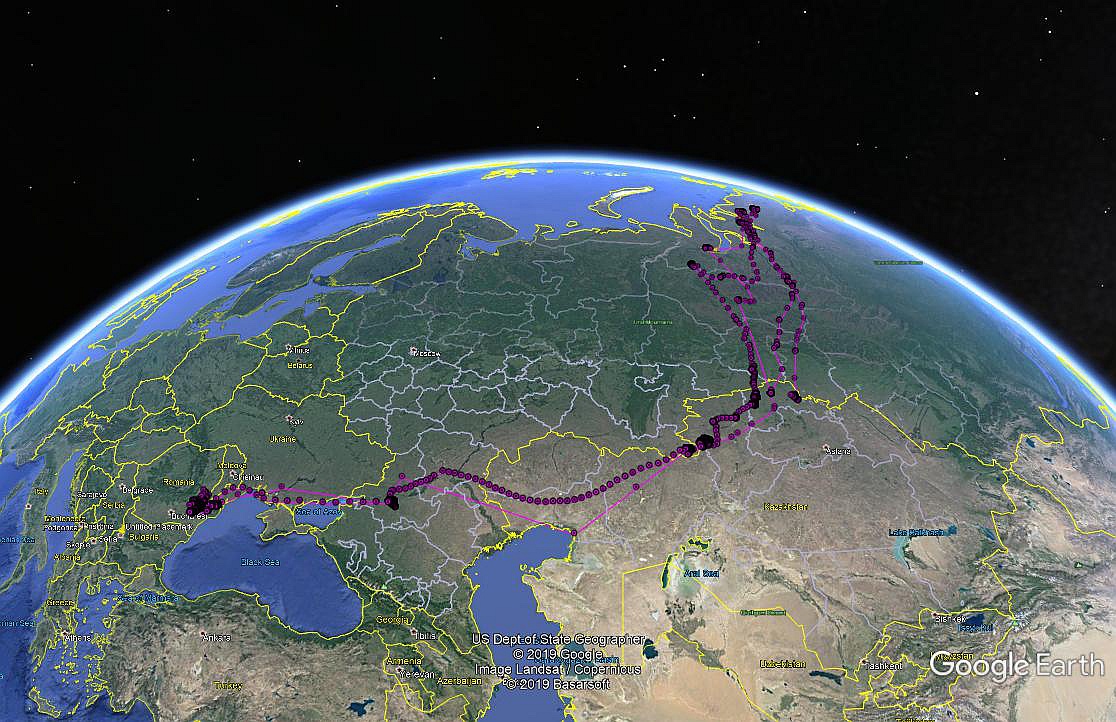 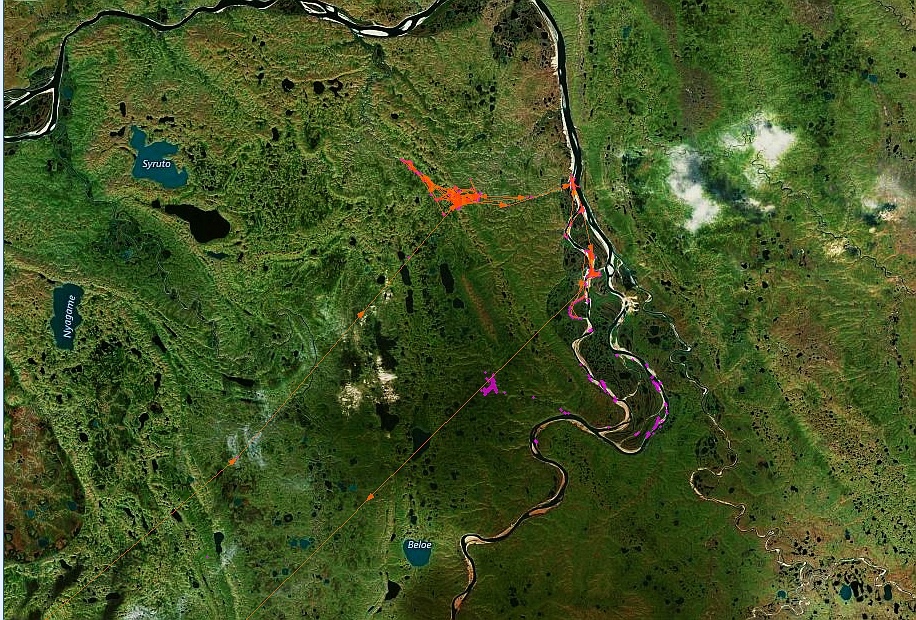 Emilia was captured in North Kazakhstan on May 15, 2019, during a joint expedition of BSPB, WWT, ACBK (BirdLife Kazakhstan) and North Kazakhstan University. A GPS-GSM transmitter brand Ornitel was fitted as well as a color ring from the Red-breasted Goose color-coded program. From that moment on, we began to track the goose’s movements. This information is public and is presented here.

Marking Redbreasts with transmitters and colour rings is an important activity in the framework of the international “LIFE for Safe Flight Flight” project, aimed at protecting this threatened species along its migration route. More than 10 organizations from all key range countries of the species – Russia, Kazakhstan, Ukraine, Romania and Bulgaria – join efforts in this project.

Emilia spent the breeding season of the Taimyr Peninsula in its eastern part along the Pyasina River in the Arctic tundra of Russia. In the beginning of September, it started its autumn migration to its staging and wintering grounds, passing through Kazakhstan, Russia, Ukraine consecutively and on November 21, 2019 arrived in Romania. For the next few weeks the location of the goose was mainly within the area SW of the city of Braila in SE Romania. The transmitter was set up to collect information every 30 minutes. 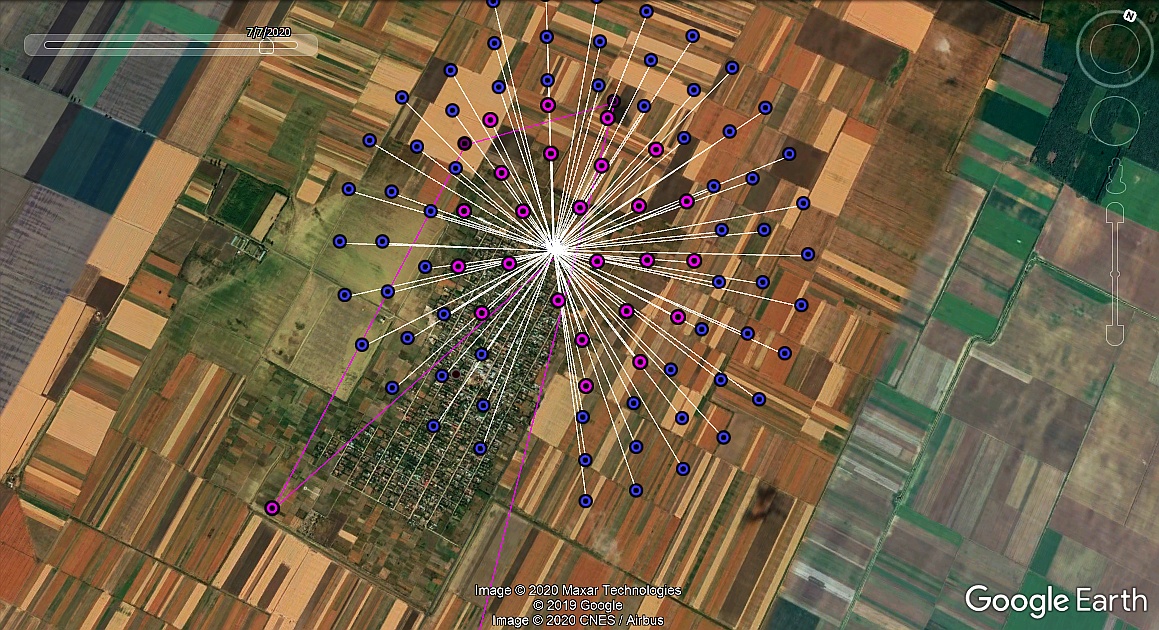 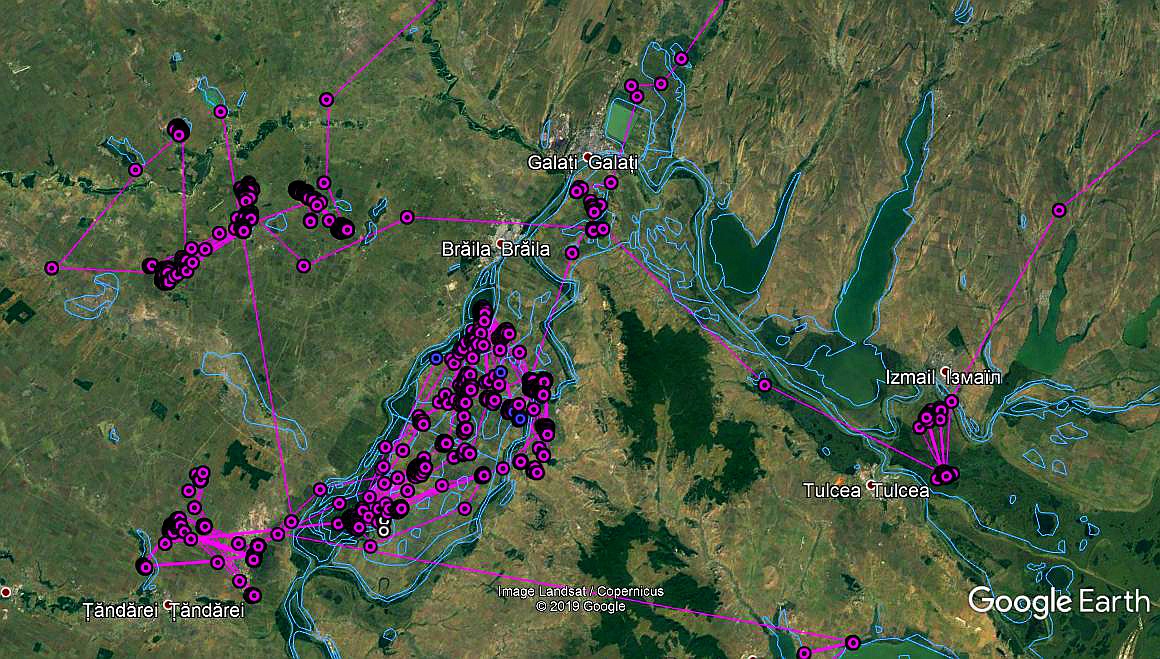 On 15.01 it was found that Emilia’s latest signal locations were coming from one and the same position in a back yard in the north of Victoria village. This made it clear that something had happened to the goose. The data sent by her transmitter were from feeding area 7 km southeast of the village at 16:57 in the evening. The first data from the area of the back yard of Victoria village is from 19:27. 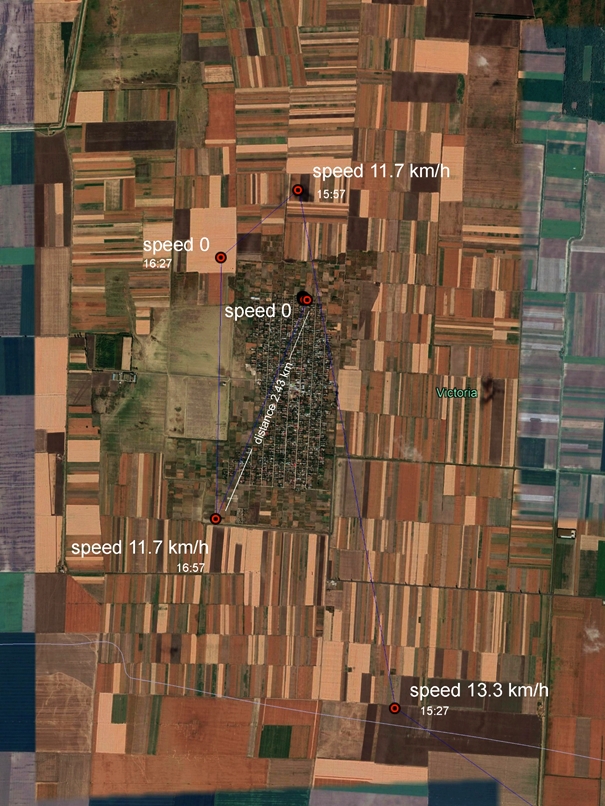 A field mission was urgently organized with all relevant local institutions in Romania participating to find out what had happened. On January 16, representatives of the Police, RIEW, Forest Guards, SOR, BSPB visited the site. A transmitter, two rings (one metal and a colour ring), multiple feathers, and the intestines and organs of a Red-breasted goose were found in an village yard near yard guarding dogs on a chain. This clearly showed that the goose had died. The version of the owner of the property is that he released the dogs in the evening and they brought the carcasses of 3-4 geese, not just one.

After the on-site visit, a detailed analysis of the transmitter’s data was made, with the assistance of colleagues from the Norwegian Ornithological Society. The information on the bird’s behavior throughout the migration route was analyzed, as well as the individual parameters of behavior and flight data throughout the different parts of the day. The facts show the following – the bird was flying relatively normally until about 5 pm in the area of the village. At the time of the next location of the bird within an hour from the village she was practically no longer moving. The distance traveled in an hour is about 2.4 km, that is, the goose must have flown at a speed of 2.4 km/h to get there for an hour. The other obvious problem is that the temperature of the transmitter shows normal state of the bird until about 14.57, when the temperature of the transmitter drops sharply and ceases to maintain the temperature of a live bird. In practice, this says that by 3pm the bird was probably already dead, which, according to our colleague Dr. Thomas Aarvak, shows that the bird was probably shot in the fields!

Further the transmitter data shows that the goose, after taking off from the fields, did not head south east to the overnight location (where it came from in the morning) but headed straight to the village in a completely different direction – to north, the points outside the yard being within GPS error margin. This is quite atypical behavior if the bird was still alive. 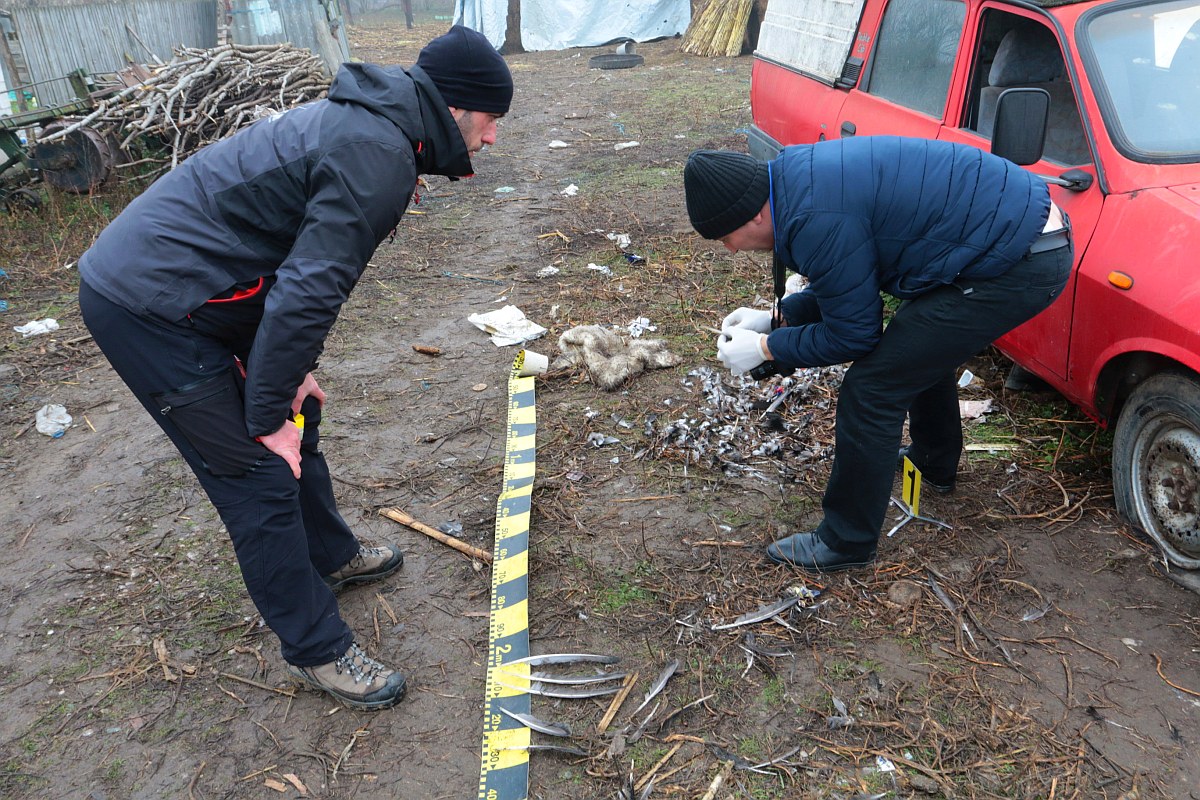 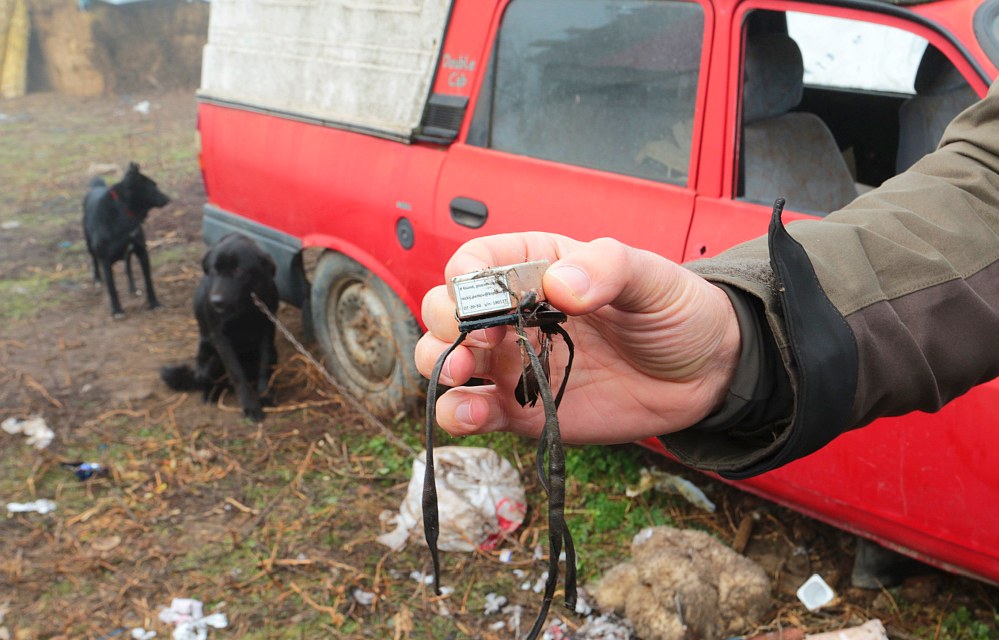 According to the property owner in whose backyard the remains of the goose and its transmitter had been found, the goose had fallen due to fog and had been killed by his dogs, which he had released in the evening. His version that the dogs ate the whole red-breasted goose – Emilia and at least 2 others is hardly true because of several reasons: 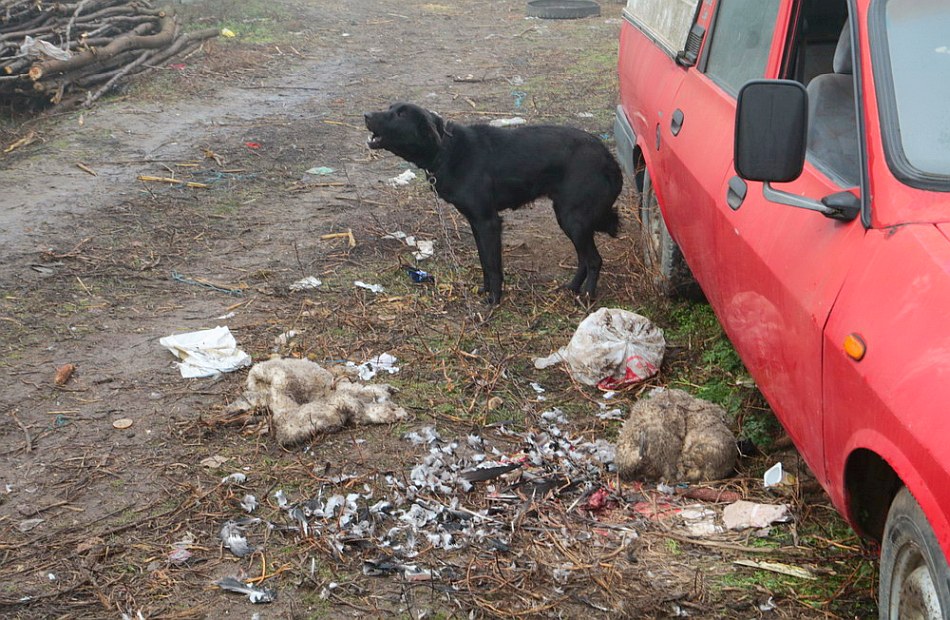 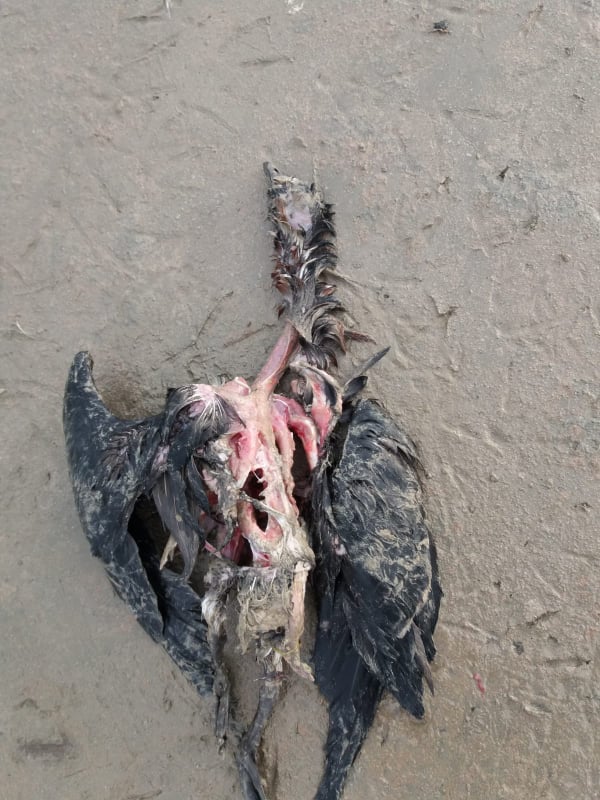 Most facts indicate that Emilia was shot or killed by poacher in the area where it was feeding or near the village, after which it was brought to the village yard and the remains of it (including the transmitter) were thrown to the dogs and the goose body was taken by people for food. The data provided by the transmitter, namely flight speed and altitude, transmitter temperature data (indicating a live or dead animal), support this hypothesis.

This is how Emilia’s life ended… Over 10,000 km flown over 9 months, showing us incredible details of the life of the Red-breasted Goose. Unfortunately, many of Emilia’s other fellow redbreasts have a similar fate…We have already lost contact with the transmitter of “Sergey” shortly after it arrived in Balta Alba SPA during active Italian hunters session.

An investigation is currently underway, hopefully the truth will come to light and the guilty guys will bear a just punishment.